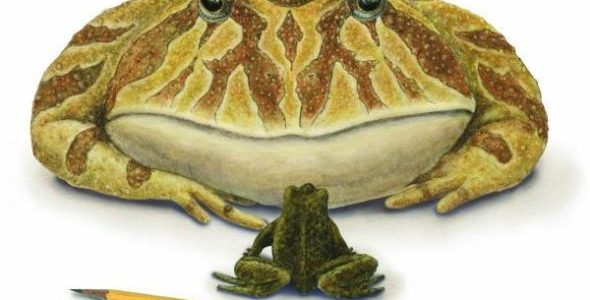 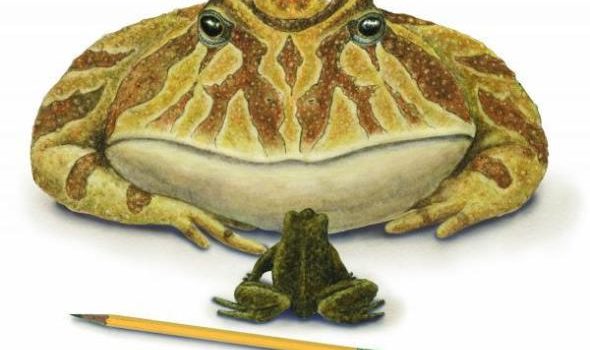 Toads are not exactly our favorite animal.  They’re pretty slimy, have bulbous eyes, they can be poisonous as anything and they’re really creepy looking....

Toads are not exactly our favorite animal.  They’re pretty slimy, have bulbous eyes, they can be poisonous as anything and they’re really creepy looking. They’re amazing too, especially if you look at a Poison Dart Frog with their incredibly brightly colored skin.  Still, toads are not our favorite amphibian!

However, saying that, I would not particularly like to see a single toad explode. And yet one of the most awful things happened in Germany in 2005 – A THOUSAND TOADS PUFFED UP AND BLEW UP.  They exploded, boom bang kapow, with their insides flying all over the area, blood splattering everywhere, toad body parts stuck to things.    Apparently the toads swelled up to more than 3 times their normal size – and these were big toads to start off – and just burst.  Their parts are thrown around the lake, on the shores of the lake, for many meters going inland.

People who saw it said it was the most disgusting thing they had ever seen and also the most disturbing.  It kind of goes with fish falling dead from the sky or slime being emitted from eels all over people.

The lakes were cordoned off and no-one was allowed to go near.  Previously, the lakes had been places of recreating for families with their children and their dogs.  Now, people were terrified that their own children were possibly poisoned.  There were many panic visits to doctors to check on the children, and vets were incredibly busy examining dogs that had been swimming in the lake.

Everyone was fine but no-one was relaxed because it was still a mystery why the toads had exploded.  There were rumors that in the same way whales beach themselves, toads blow themselves up, a form of suicide.  That theory was quickly put to bed.  Another was that it was a sign of the end of the world, of the apocalypse.  That theory was put to bed just as quickly.

I mean, let’s say this again.  Exploding toads.  It makes no sense.

But, scientists did make sense of it.  And the reasons were pretty bizarre.

This was a case of murder and the murder was cracked by Detective Frank Mutschmann who was not an ordinary detective at all.  He was an expert in amphibians.  He had the gruesome job, with his staff, of examining the body parts of the exploded toads and comparing them to living toads.  Yes, he had to get living toads out the same lake, and conduct experiments.

This is not a job for the faint hearted.  Only a scientist would want to do it!  Mutschmann and his team dissected the toads or what was left of them.  What they found was that each toad had a circular incision on their backs.  It was like the work of a serial killer, killing off the toads.

He knew the work was not that of a rodent or a jackal or an animal of sorts or there would have bite marks and scratches.  And he knew this was not the work of humans.

But it was the work of serial killers. The serial killers were crows!  These toads were murdered, literally, by crows, who had developed a taste for toads.  Or, more simply put, for foie gras, for the liver of the toads.

If you are reading this and feel ill, I am sorry.  This is a truly extraordinary phenomena.  The scientist and his team found out that there were NO LIVERS.  The toads had murdered the crows so they could eat their livers.  These birds, and crows are exceptionally clever, would pierce the skin of the toad with their beak and get the liver out.  They knew not to touch the skin because the skin is toxic, but they went straight for the delicacy that they so badly wanted.

Honestly, we don’t recommend you try it.  The crows may have been full and satiated but the toads all met a terrible death.

What happened is that the crow would pierce the skin of the toad and somehow draw out the liver.  The toad, realizing it had been attacked, would go into its natural defence mechanism, which is to puff up.  But because the liver was gone, there was nothing to hold the organs up and in and together.  It meant that the lungs of the toad had to stretch as much as they could to support the organs.  But the lungs couldn’t keep stretching and stretching and stretching and I think you get the picture – the toads exploded.

Once the mystery had been solved, Mutschmann looked into other stories of exploding toads.  This was not the first time it had happened.  In fact, in 1968 there was a story of toads exploding not just in Germany but also in Belgium, Denmark and as far afield as the USA.  These toads started exploding during their mating season which goes on for a week.  Apparently the crows went for the kill when the toads were at their peak sexual excitement and didn’t even noticing the crows pecking them.  What a way to die!

Toads in Europe are often protected species.  There are many different kinds of toads and perhaps after this story, I at least will look at toads in a different way, maybe even feel sorry for them.  Crows are fascinating as they are such a common bird but they are such a clever bird too.  Perhaps the next mystery to uncover will be one about crows and exactly what they know and how they know it.

Toads, Crows and Foie Gras.  A tale of Horror.

Haicheng Earthquake & The Animals Who Predicted It