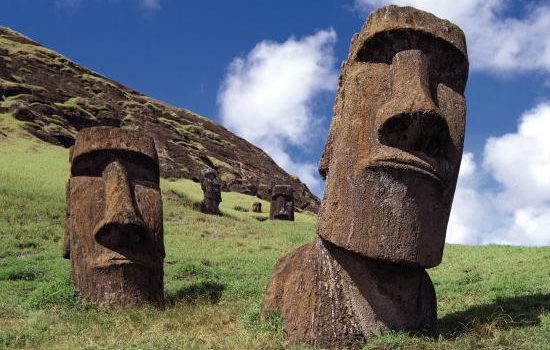 The Easter Islands are thousands of miles away from all other continents and are one of the most remote places in the world.  They’re...

The Easter Islands are thousands of miles away from all other continents and are one of the most remote places in the world.  They’re around 64 square miles in size (not big) and they’re impossible to miss, even though they’re in the middle of nowhere and surrounded by more water than any other place on earth.

The Easter Islands are covered in giant heads.  And when we say giant, we mean giant.  There are thousands of heads, some still in perfect condition, carved out of the land.  And yet the Islands have been uninhabited for years.

So what is the story.  Well.  Between 400 and 600 AD the Easter Islands were inhabited by a seafaring race who were a primitive and very superstitious people.  They were a small community that lived off the land, a mostly solitary and quiet existence.  There were around 1000 families, each family with a small village of their own.

The clan leader came up with the idea of each family making a carving.  They called these carvings MAOI and they were carved out of a soft volcanic rock, native to the Islands.  The MAOI are mostly enormous heads of the ancestors, and were built to look out for and look after the people.  Each group of villagers wanted their own MAOI and so if you have 1000 families, you have 1000 heads.

The story goes that the carving of heads became competitive.  The clan leader encouraged his villagers to keep building, to go as big as they could.  These heads, these Maoi, were going to keep the people safe.  Remember, they were a superstitious people.

When there was a natural disaster such as huge storms, floods and hurricanes, there was nothing to protect the people, everything that was indigenous had been removed.  The island became ravaged.  And the people kept building, carving and of course stripping.  Until there was nothing left – no farmland, no protection, absolutely nothing.  Other than 1000 magnificent and enormous heads.

It seemed clear that the MOAI were not looking out for the people at all. They had reached the lowest of the low in order to survive.  And they had brought it upon themselves.

The people knew they had to cleanse themselves.  They moved to a nearby set of islands, the Bird Islands. Here they began a new cult – remember, superstition was still the order of the day.  This cult involved sporting competitions. Each year there was a race.  Athletes had to climb down the mountain (go and look at pics of Bird Island, there are very high cliffs) swim out to sea, find a bird’s nest, get an egg and return it, unbroken.  The winner became chief.

This could have been hunky dory. The people had found a new way to live and were no longer destroying the land.  But they were doomed in a different kind of way.  During the early 19th century, a new problem.  Slavery.  American and South Americans ships were trolling waters, looking for slaves. They found them on Bird Island.

Life was never going to be easy for the inhabitants of Easter Island or Bird Island.  They either brought their trauma on themselves or they were terrorized.  At their lowest point, the population went down to 101 after being ravished by small pox.

In 1888 Easter Island became a colony of Chile. More exploitation.  The natives who remained were moved to a small western part of the island.

But the heads remain.  There is no mystery as to who mad them or how they made them. The inhabitants made them.  They were enormous, and are still enormous.  The heads dwarfed the body entirely, although there are bodies.

The heads are mysterious if you look at them.  Did humans ever look like that? Were the ancestors completely different to what we are today.   Enormous heads.  Very wide slanted eyes.   And what extraordinary talent the people had to be able to carve them and also MOVE them to where they wanted them to stand.  Clearly they had powers.

Today the Easter Islands are a tourist attraction.  People who go and see them are blown away by the stories from the Islands and by the sheer magnificence of the heads.  It is astonishing to think of human man making these heads, by hand, and making them perfectly.  They clearly had extraordinary and sophisticated tools.  And they also had the tools (machinery?) to move these heads.  They were very sophisticated even though they lived a life of total isolation.

The world is mysterious.  People think the mystery is about the heads only.  For many years it was thought that the heads did not have bodies but they do have bodies.  They were either photographed in such a way that they looked bodiless, but also many of the bodies had been covered over the many years that they just stood there.

The mystery is how they made them!  They are a little bit similar to the pyramids of Egypt, the sheer size and enormity of things made in an age when there was no machinery.  We know that the inhabitants were religious and we know they were spiritual and superstitious.

Did they have super powers as well? It is quite possible they did.

The Darvaza Crater – Door To Hell
Recent Posts View all