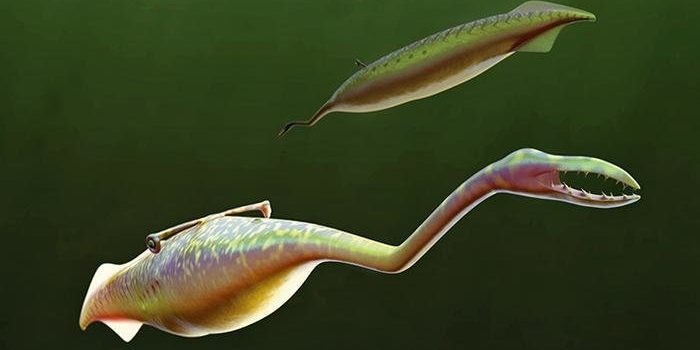 There was a kind of monster that lived in the coastal estuaries of north eastern Illinois and it may well give you some pretty...

There was a kind of monster that lived in the coastal estuaries of north eastern Illinois and it may well give you some pretty hairy goosebumps.Well this was not exactly a “monster”, it is an extinct genus of soft-bodied bilateran that lived roughly 275 million years ago. Any monster will give you goosebumps but this one was like a SLUG, a soft bodied underwater alien with eyes on stalks – try and imagine that – and very sharp teeth on the end of a long and narrow trunk. And then, think of a slug, soft and a little slimy, moving in a stealthy but slow way towards you! Gliding towards you, sharp teeth, beady eyes, slimy body…

You may be saying ‘oh that’s just a fish,’ but we can tell you it was not a very pleasant fish. Also, fish do not survive for millions of years. This one flourished about 307 million years ago and flourished amongst sharks and all sea animals. And because the body is so weird ,and wait till you look at the pictures, the Tully Monster has been ranked right at the top of scale for ‘weirdness.’

Or – it may still flourish. The Tully Monster has baffled scientists and palaeontologists for over fifty years because of it’s very odd body make up. The real name of the creature, who has only been analysed through fossils, is Tullimonstrum Gregarious. Initially scientists thought it was an unusual underwater kind of worm or free swimming slug, but now it is known, or though to be known, as a type of jawless fish.

What is a jawless fish you may ask, and does that even constitute as a fish?

Let’s try and work it out. We have a fish without a jaw. It has a body shaped like a torpedo. It has a long thin trunk that ends with two rows of sharp teeth that are almost claw like, and the eyes – they will freak you out the most – are set on the end of stalks, almost like a long bar that extend sideways from the head. The fish, or the monster as I think I prefer to call it, is about 35 cms long with a vertical tail fin and a long narrow dorsal fin.

And then we have to look at how this dear fish monster ate. It fed by grasping things and listen to this, scraping bits off with it’s tongue. It would hold it’s prey and pretty much lick it to death.

That’s weird. A bit like a cannibal or a serial killer, it was a pretty macabre way to kill prey. It also apparently did a fair amount of blood sucking. That does not make me feel good. A cannibal. A blood sucker. A serial killer!

Finding out about the Tully Monster was dream work for palaeontologists who always like to be able to understand animal (or fish) behavior, label the animal accordingly, find out what genre they belong to and what age they belong to. But the Tully Monster has defied all the rules. It’s been hard to categorise it with a single group of fish or animals because it is so unusual. There are fossils that are studied and answers may becoming clearer but there is still much about the Tully Monster that defies the odds. Because lately, new research is showing that this weird animal was not a fish at all. Although it swam around with fish, sharks, jellyfish and sharp, it seems to have been something totally different.

So what was the Tully Monster if it wasn’t really a monster?

It may have been a vertebrate. Is this a mystery you may be asking, but the answer is yes. Research is constantly being done on this odd thing. It has been found to have had one long almost ‘backbone’ that would make it a vertebrate. It has melanosomes which produce and store melanin. And no-one is quite sure which way is the ‘right way up’. Again, it defies all the odds.

You might be thinking that this is just a very unusual species, which of course it is. Remember, species group together. It is easy to identity something as a dinosaur, a domestic animal, a fish, a bird, a reptile or a vertebrate. There are common characteristics that make sense. And once a species has found its group, it is easy to classify from whence it came, i.e the origin and the time. So when you get a species that does not fit in with anything, ie., The Tully Monster, one has to wonder how this is possible.

Everything fits in with nature, everything has an explanation, everything always pieces together. Except the Tully Monster.

The Tully Monster was first found by Mister Francis Tully in 1958 and named after him. The Monster was thought to have lived around 300 million years ago and fossils have been found, many actually, preserved in ironstone. When Mr Tully found the first one he took it to the Field Museum on Natural History in Chicago which is where palaeontologists began to investigate.

It is not uncommon, by the way, to find fossils in the north eastern Illinois waters. Many different fossil deposits and organisms have been preserved here, both animals and plants. Some lived in the ocean and some were washed up. The thing is, usually you can say if it is animal or plant. With the Tully Monster, the jury is still out. Scientists are still doing constant experiments and research to try and solve the mystery.

What is it? We know it is unusual and it defies the odds. It wins the prize in being weird. It makes us feel a little uncomfortable and a little creeped out.

With the Tully Monster, it is still hard to say what it is.The Tully Monster has a reputation though! It has been designated as The State Fossil. It now sits in the Illinois State Museum where it belongs. Go and have a look and see what you think.

Haicheng Earthquake & The Animals Who Predicted It
Recent Posts View all