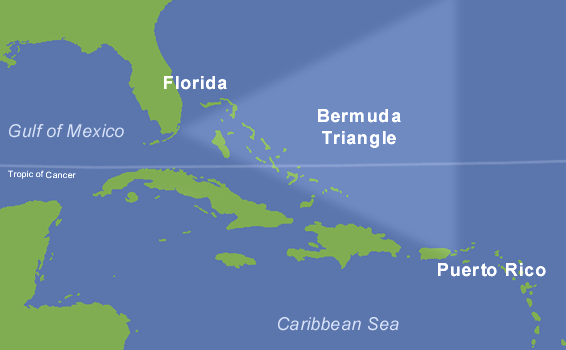 The Bermuda Triangle, also known as the Devil’s Triangle, is a loosely-defined region in the western part of the North Atlantic Ocean, where a...

The Bermuda Triangle, also known as the Devil’s Triangle, is a loosely-defined region in the western part of the North Atlantic Ocean, where a number of aircraft and ships are said to have disappeared under mysterious circumstances. Most reputable sources dismiss the idea that there is any mystery. The vicinity of the Bermuda Triangle is one of the most heavily traveled shipping lanes in the world, with ships frequently crossing through it for ports in the Americas, Europe, and the Caribbean islands. Cruise ships and pleasure craft regularly sail through the region, and commercial and private aircraft routinely fly over it.

Popular culture has attributed various disappearances to the paranormal or activity by extraterrestrial beings. Documented evidence indicates that a significant percentage of the incidents were spurious, inaccurately reported, or embellished by later authors.

The earliest suggestion of unusual disappearances in the Bermuda area appeared in a September 17, 1950 article published in The Miami Herald (Associated Press)[3] by Edward Van Winkle Jones.[4] Two years later, Fate magazine published “Sea Mystery at Our Back Door”,[5][6] a short article by George X. Sand covering the loss of several planes and ships, including the loss of Flight 19, a group of five U.S. Navy Grumman TBM Avenger torpedo bombers on a training mission. Sand’s article was the first to lay out the now-familiar triangular area where the losses took place. Flight 19 alone would be covered again in the April 1962 issue of American Legion magazine. In it, author Allan W. Eckert wrote that the flight leader had been heard saying, “We are entering white water, nothing seems right. We don’t know where we are, the water is green, no white.” He also wrote that officials at the Navy board of inquiry stated that the planes “flew off to Mars.” Sand’s article was the first to suggest a supernatural element to the Flight 19 incident. In the February 1964 issue of Argosy, Vincent Gaddis’ article “The Deadly Bermuda Triangle” argued that Flight 19 and other disappearances were part of a pattern of strange events in the region. The next year, Gaddis expanded this article into a book, Invisible Horizons.

Others would follow with their own works, elaborating on Gaddis’ ideas: John Wallace Spencer (Limbo of the Lost, 1969, repr. 1973) Charles Berlitz (The Bermuda Triangle, 1974); Richard Winer (The Devil’s Triangle, 1974) and many others, all keeping to some of the same supernatural elements outlined by Eckert.

Compass problems are one of the cited phrases in many Triangle incidents. While some have theorized that unusual local magnetic anomalies may exist in the area, such anomalies have not been found. Compasses have natural magnetic variations in relation to the magnetic poles, a fact which navigators have known for centuries. Magnetic (compass) north and geographic (true) north are only exactly the same for a small number of places – for example, as of 2000, in the United States, only those places on a line running from Wisconsin to the Gulf of Mexico. But the public may not be as informed, and think there is something mysterious about a compass “changing” across an area as large as the Triangle, which it naturally will.