Charles Babbage is considered by many to be the father of computers, and is credited with inventing the first mechanical computer. Be as that...

Charles Babbage is considered by many to be the father of computers, and is credited with inventing the first mechanical computer. Be as that may, there seems to be another device which could possibly claim the title of being the first mechanical computer, and that too by a very large time gap. The so called “world’s oldest computer” is a 2000+ year old, highly complex mechanical device which for over two millennia lied at the bottom of the sea off the coast of Antikythera.

Since its discovery in 1900s, the ‘Antikythera Mechanism’ as it has come to be called, has continued to intrigue and baffle scientists with its prochronistic design, complex internal mechanism and overall ingenuity. 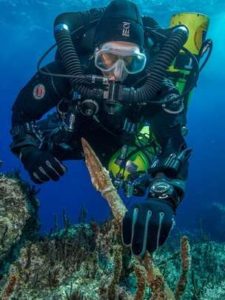 It was in April 1900 that a bunch of sponge divers discovered a ship wreck off Point Glyphadia on the Greek island of Antikythera. It was a proverbial treasure trove of ancient artifacts with numerous coins, statues and other works of arts dating back to the 4th century BC.  The divers were horrified to see that seafloor was strewn not only with these invaluable pieces but also rotting corpses of men and horses. The wreck was believed to be of a Roman ship carrying loot from Athens around 85 BC.

A frenzy of collection and curation of the artifacts followed, with the restored items finding safe home at the National Museum of Archaeology in Athens. Among the retrieved items was a lump of corroded bronze and wood. It was kept aside while the museum staff worked on piecing together more obvious items like statues and writings. After all this lump looked neither artistic nor valuable. 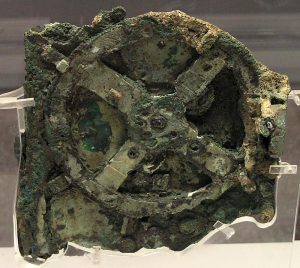 It was only about two years after the discovery of the wreckage that the Antikythera Mechanism finally caught the attention of curators and work commenced on cleaning and understanding the device. What they uncovered had them in shock.  With a complex clockwork mechanism detailed enough to be the pride of a Swiss watch craftsman, it is composed of over 30 meshed metal gears, some with over 200 teeth. These gears are interconnected with each other with amazing precision and detail and creates a sophisticated mechanism. For many years  archaeologists and researchers were not sure if it was a clock, calender or some other calculating device. One thing they were sure of – it was definitely much more advanced and complicated than anything they had imagined to be in use during those ages.

After decades of detailed study, scientists today believe was used to predict astronomical positions and eclipses for various calendar and ceremonious purposes. To imagine that about two thousand years ago, the ancient Greeks invented a machine that not just recorded time or days, but the entire cosmos is astounding. In fact it was about 1500 years later that mankind ever built anything that came even close, and even those were bested in accuracy, design and sheer awesomeness by this ancient artifact.

Guess what else is amazing about this device? Well, it could be the very first one known to mankind that comes with an instruction manual! Thats right, using advanced imaging technologies, scientists have discovered text – some kind of instruction sets written in legible ancient Greek- inscribed on parts of the mechanism. We don’t even have words to say how cool that is.

It has been widely touted as the worlds first analog computer and its complexity and purpose seems to be far too advanced for anything that any civilization during that period of time had the ability to achieve. Even in recent times more studies and research have been commissioned, both for the mechanism as well as the wreck site of Antikythera in the hopes that it will reveal more insight on the amazing technologies that were in use in those ancient times.