The Nazca lines are ancient geoglyphs discovered in 1927, in the Nazca desert in Southern Peru. They are one of the most famous geoglyphs...

The Nazca lines are ancient geoglyphs discovered in 1927, in the Nazca desert in Southern Peru. They are one of the most famous geoglyphs in the world. A geoglyph is a series of designers or motifs usually longer than 4 meters produced on the ground and more visible and meaningful when viewed with the aid of flight.

Researchers believe the Nazca lines were created anywhere between 500 BC and 500 AD. One of the things that baffles researches about Nazca lines are their sheer size and volume of work. There are several hundred human and animal forms drawn in the Nazca lines. The area encompassing the lines is nearly 450 sq km (170 sq mi), and the largest figures can span nearly 1,200 ft (370 m). The Nazca desert is one of the driest on Earth and maintains a temperature around 25 °C all year round and the extremely dry, windless, and constant climate of the Nazca region has preserved the lines well. The lack of wind has helped keep the lines uncovered and visible. 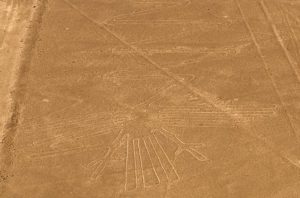 It is perplexing how the ancient Nazca civilization were able to create such extremely large earth images whose precision and structure can only be appreciated if one is looking down from the skies. One theory suggests that they were drawn by the Nazca people as a token of appreciation to their Gods, so that when the Gods looked down from the heavens they could gaze upon the work of their people. However the mystery remains how they were able to draw the structures with such precision and without any aid.

In the modern times, there have been studies which contradicts Woodman’s theories. For example, the Nazca lines can be viewed from the nearby hills and based on cultural studies, it has been theorized that the Nazca people honored their dead by burying them and do not seem inclined to part with their dead bodies in a fashion as theorized by Woodman.

Irrespective of whether the ancient Nazca people had taken flight or not, most fascinating about the Nazsca lines and figures is that such wonderful and highly sophisticated art could be designed and planned in advance, then executed by people on the ground who could not really see what they were doing. This suggests very advanced thinking and planning skills and social organization from a civilization that lived between 500 BC and AD.