President John F. Kennedy’s assassination on Friday, November 22, 1963 while he was traveling in an open-top limousine as part of a motorcade, through...

President John F. Kennedy’s assassination on Friday, November 22, 1963 while he was traveling in an open-top limousine as part of a motorcade, through Dallas, Texas is one of the most shocking political assassinations of the modern times.

Over five decades of painstaking, highly involved and yet ultimately for some, unsatisfying analysis has been done about the high profile murder. It was Lee Harvey Oswald, an American sniper and former US Marine who had defected to the Soviet Union in October 1959, who was the assassin. Following Kennedy’s assassination, Oswald was initially arrested for the murder of police officer J. D. Tippit, who was killed on a Dallas street approximately 45 minutes after President Kennedy was shot.

He was later charged with the murder of Kennedy though he strongly denied shooting anybody, and maintained that he was being made a scapegoat. Two days later, while being transferred to the county jail, Oswald was shot and killed by Dallas nightclub owner Jack Ruby, in full view of television cameras that were broadcasting the transfer live. The unexpected assassination of the assassin triggered the wild imaginations of the public and led to many conspiracy theories about both murders.

Most JFK conspiracy theories revolve around the idea that Oswald wasn’t acting alone. Newspaper articles record that shortly after the shooting, police arrested three tramps found in a railroad car behind the knoll where Kennedy was struck by the fatal bullet. Because the ‘tramps’ were clean-shaven and well dressed there was speculation that they were CIA assassins rather than hobos. 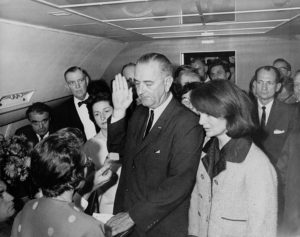 In 2003, a Gallup poll revealed that 20 per cent of Americans believed Lyndon B Johnson had something to do with JFK’s death. LBJ as he was known, was serving as Vice President under JFK and was quickly sworn in as president just 2 hours and 8 minutes after Kennedy’s assassination.

There are many other conspiracy theories involving the death of JFK ranging from Illuminati to Jackie Kennedy to Little Green Men.. However silly and far-fetched these theories may be, it remains a fact that people are still obsessed with the murder that send shock waves across the world. And its a controversy that fails to die. Earlier during his presidential race, Republican presidential hopeful Donald Trump insinuated that Senator Ted Cruz’s father was connected to the assassination. His comments were based on a photo published by the National Inquirer, which the tabloid claims shows Rafael Cruz distributing leaflets with Oswald just months before he murdered the president.

Let us hope that one day soon we will get some full and undeniable proof on why the president was killed and who were involved in the murder. In today’ world of wikileaks and digital data access, it might not be a distant happening.