Undoubtedly, people love conspiracy theories. Every living person has wondered about a conspiracy taking over their world at one time or the other. Talking... 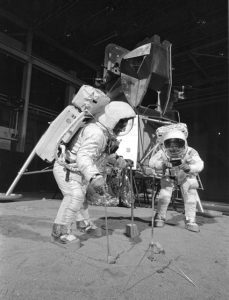 Undoubtedly, people love conspiracy theories. Every living person has wondered about a conspiracy taking over their world at one time or the other. Talking of conspiracy, moon landing has never and will never be overlooked.

Evidently, many still wonder if truly Neil Armstrong ever set off this planet. Well, it’s almost five decades since that giant leap for mankind. Honestly, there is very vague proof that the lunar landings really took place. Doubting Thomases believe that it was just a war for supremacy between the U.S government out to beat the Russians in the space race. Anyway, you may also wonder – virtually fifty years ago, two Americans land on the moon and walk upon its surface. How come now it’s so hard to go back? NASA has often set ambitious project to return humans to the moon by 2020 with main goal being to significantly expand from last time. If NASA managed the first lunar landing of Apollo 11 on July 20, 1969, why all the mind-boggling efforts since 2004 in effort to go back. Considering the advancements in technological arena, it should be even easier than before.

From a more realistic view, the elements of the Apollo program and the related moon landings were mere hoaxes. If hearsay is something to go by, NASA staged the same. Claims exist that the six manned landings (1969-72) were faked while the 1 Apollo astronauts never really walked on the moon. There has been a public mislead into believing the landings happened. This entailed manufacturing, tampering with evidences, moon rock samples and some key witnesses. Furthermore, if there was even no video broadcast to record the takeoff or landing due to the limited technology, how could this one be possible?

Additional third-party evidences for the landings reveal high-definition photos taken by the Lunar Reconnaissance Orbiter (LRO) of the Apollo landing sites and six Apollo missions’ American flags erected on the moon. However, one wonders what happened to the Apollo 11, which got accidentally blown over by the takeoff rocket’s exhaust.

Despite the ever-growing rebuttals and third-party evidences, conspirators still sustains public interest in their theories. Chances of a successful manned moon landing are easily faked than factual. There have been various theories about the faked moon landings as outlined below.

The space race.
The prevalent cold war at the time of moon landing claims is the main aim for the United States to engage the Soviet Union in the space race. Moon landing would undoubtedly be risky and expensive. Managing it would therefore be deemed to be a huge national and technological milestone.

NASA funding and prestige.
Kennedy’s 1961 objective was clearly to have a man land on the man and return safely to the Earth. While this was impossible at the time, NASA had to fake moon landing to save him and themselves from humiliation. This was also aimed at ensuring constant funding. It is claimed that NASA was able to reap about US$30 billion from the same. Wouldn’t you trade public trust for such an amount as well.

Vietnam War.
The faked landing was to distract public attention from the unpopular Vietnam War. You may also wonder, how comes the manned moon landing timing collided with the time the United States was ending its involvement in the war.

Realistically, considering the size and complexity of the conspiracy theories, they are impossible. For instance, for a credible firsthand information, it could have involved at least 400,000 people who had been involved in the Apollo project for almost ten years, the 12 personnel who are claimed to have walked on the moon, the six others who flew with them as module pilots, six astronauts who orbited the moon and of course hundreds of technicians, skilled laborers and scientists. Honestly, it would have been much easier to land on the moon than to create the conspiracy of moon landings.

The verdict is that the whole moon landing idea was a hoax from the beginning. Evidently, at that time there wasn’t sufficient technology to send people to the moon. The solar flares, solar wind and cosmic rays especially at that era would have made such a trip impossible.