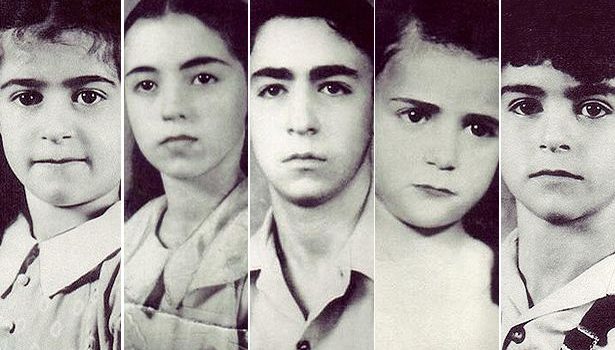 For the past four decades, a billboard, placed on Route 16 near Fayetteville, West Virginia, bearing images of five Sodder children makes everyone passing...

For the past four decades, a billboard, placed on Route 16 near Fayetteville, West Virginia, bearing images of five Sodder children makes everyone passing by to stop, stare and wonder about what happened to those young children. The faces of all five are so cute and innocent that the very first sight gives one a stenciled breath along with sympathy for the parents who lost their children on Christmas Eve, 1945 and till date have no clue as to whereabouts of their five children.

The unfortunate night began right after the Christmas Eve dinner when George and Jennie Sodder, were celebrating the Chrismas Eve with nine of their children. The tenth one, Joe, was at his Army job out of the city. After the dinner, George went to sleep followed by his two sons George Junior (16) and John (23). Jennie too wanted to retire to bed for sleep at the earliest but six of her children i.e. Marian (17), Maurice (14), Martha(12), Louis (10), Jennie (8) and Betty (6) still wanted to play with their toys. So, thinking of not spoiling the mood of her children on Christmas Eve, Jennie went to bed with her youngest daughter, Sylvia (3).

It was a little past one at the midnight that the phone ring woke her up. When she answered the phone, she heard some lady asking to speak to some stranger but when Jennie said that it was a wrong number, the lady on the other side laughed and just hung up the phone. While Jennie was still thinking about the call to be a prank, she realized that the doors were still unlocked and the lights still on. She was surprised to see all this as her children usually never forgot to do these things before going to sleep. But without giving it much thought, she returned back to sleep.
All of a sudden, she heard something rolling on the roof along with a thumping sound. She screamed to realize that her house was on fire. Listening to her shrieks, her three children successfully ran out of the house with their little sister Sylvia.

George, too, went outside but suddenly he saw his remaining five children inside the house. He tried his best to enter the burning rooms but in vain. He even tried using the window to enter but as a result, he ended up cutting his arm. Till now, the fire had fiercely covered the first floor. He, then, went to splash water on the fire but sadly, the freezing cold had turned the same into ice. Afterwards, he ran to get the ladder but could not find it at the place where it was usually kept. He even tried of climbing the house but with one arm, it was next to impossible. Now, everyone thought of giving it a final attempt to save the five children. They tried using the work trucks to jump to the top floor but unluckily the trucks engine were also frozen due to harsh cold winter and the ignition never turned the engine on.

By now, their daughter Marian called the fire department from neighbors’ place but even the firemen made it to their place at 8 a.m in the morning whereas the house was reduced to ashes by 2:30 a.m at the midnight. The investigating police concluded the cause of fire to be faulty wiring but George claimed that the wiring was recently re-done. Corner’s Jury ruled that the five children died in the fire accident but no remains of the children were found in the ashes. What makes the Jury interesting in this particular case is that one of the jurors was the man who had earlier gotten into an altercation with George Sodder and had threatened him that his house would be “burned down” and his children “destroyed”. For reasons, that go over the top of our head, that particular individual was never investigated, and allowed to be part of the Jury.

The Sodder parents believed that the children were kidnapped and house was intentionally set on fire by the kidnappers. They had their own reasons to believe foul play – even though the police investigation had mentioned faulty wiring, their Christmas lights had remained on through out the initial phase of the fire. The ladder which had been missing from its regular place by the side of the house was inexplicably found about 70 feet away at the bottom of an embankment.

Some say that they had seen the children in a passing car near the house. Some say that they saw someone throwing bomb type balls to the house. Jennie even tried burning chicken bones on gas stove, testing if bones could be completed burnt without a trace, but in spite of many tests she did, she always got charred bones remaining, something they never found of their children at the fire site.

In 1949, George was able to convince local authorities to perform a detailed and organized excavation of the fire site in hopes that some clues would emerge. Several small bone fragments were found, which were concluded to be part of human vertebrae. This again opened up hopes that some closure might after all be brought to the mysterious incident. However it only lead to more bizarre revelations. An expert at the Smithsonian Institution concluded that the bones were indeed human but belonged to an individual who was 16 or 17 years old. Maurise, eldest child who was missing was only 14 at the time of the incident. Further, everyone were baffled why these were the old bone fragments to be found, since such a fire should have left behind more skeletal evidences.

After six years, George placed a billboard of missing children and offered a reward of $10,000 to anyone who could find them. Over the next many years he traveled. Reports say that a photo was sent to them by someone saying that it is their son Louis but on investigation, he could never be traced from the sender’s address.

The parents refused to accept that their children died in the fire accident. George and Jeannie both died in 1969 and 1989 respectively but the youngest child, Sylivia, is still trying to search her five siblings who went missing mysteriously.